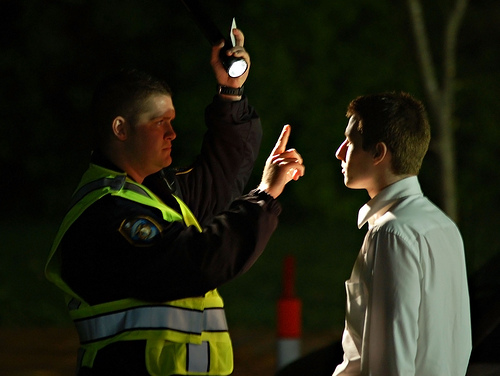 Just like doctors and teachers, police officers are human and capable of making mistakes just like anyone else.

Like many jobs that require training, officers receive training in the Horizontal Gaze Nystagmus Eye Test and according to the National Highway Traffic Safety Administration, it is one of the three tests used to determine sobriety. This test involves an officer moving a stimulus, often a finger, back and forth in front of the drivers’ eyes, to see if the drivers’ eyes jerk when following the stimulus. There are, of course, things other than alcohol and nervous system depressants which can cause jerking in the eyes. Three to four percent of the general population has nystagmus at all times for reasons other than the consumption of alcohol. Some of these reasons include: influenza, streptococcus infection, measles, aspirin, excessive caffeine, and eye strain.

The HGN Horizontal Gaze Nystagmus test is a very specific test, in that it requires the officer to do very certain things, in specific order, for the test to be considered valid and properly administered.

Pinellas County sheriff’s deputy John Hubbard was transferred to the bailiff from patrol last year after an internal affairs investigation determined his DUI cases lacked important or sufficient information needed to prosecute. Internal affairs officials investigated 38 arrests Deputy Hubbard made between January 2010 and June 2011, all but one of which was for DUI. In 24 of those cases, the investigation found, the DUI charge was either dropped or reduced because the suspect’s blood-alcohol content was barely at or under the legal limit. Internal affairs began investigating Hubbard when the assistant state attorney in charge of misdemeanors at the time, Holly Grissinger, called Lt. Glenn Luben at the Pinellas County Sheriff’s Office and notified him of a list of cases that were “either refusals or a low blow.”

“My intent on this whole phone call was for Deputy Hubbard to receive additional training, specifically with HGN (the horizontal gaze nystagmus eye test) and/or stop doing DUIs,” Grissinger said in a deposition. “His reports were getting shorter and shorter, and he was relying more and more on the in-car video for his actual report.”

During the investigated period, the report found, Hubbard arrested six drivers for DUI whose blood-alcohol content was under .08 and urine tests results for drugs came back clean. On the videos, Hubbard can be seen telling three of those drivers he believes they’re impaired based on their eyes.